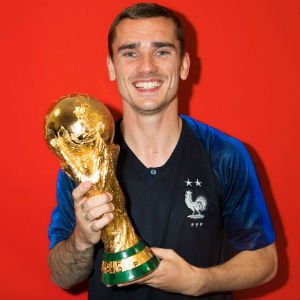 French football star Antoine Griezmann currently plays as a forward for the La Liga side Atlético Madrid besides appearing regularly for the France national football team. He kickstarted his senior career while helping Real Sociedad to win the Segunda División in 2009, during his debut season. After his five-season success, he joined another La Liga side Atlético Madrid. Through his €30 million transfer, Griezmann marked a then-record at Atlético for his transfer fees ever paid. He then surpassed the club’s scoring record for the debut season. Besides, he also earned his place in the La Liga ‘Team of the Season’ in the 2014-15 season.

For his amazing display of gameplay, he won the La Liga Best Player award in 2016. Shortly after, he helped Atlético Madrid to achieve the UEFA Europa League title in the 2017-18 season. Besides his club performances, he also played for France at various age levels. Griezmann helped his nation to win the UEFA European Under-19 Championship in 2010. He then earned his first senior cap in 2014 after playing for the U-20 and U-21 team. Griezmann helped France to become the runners-up at the UEFA Euro 2016. Besides, he also recently helped his nation to lift the FIFA World Cup 2018 trophy. 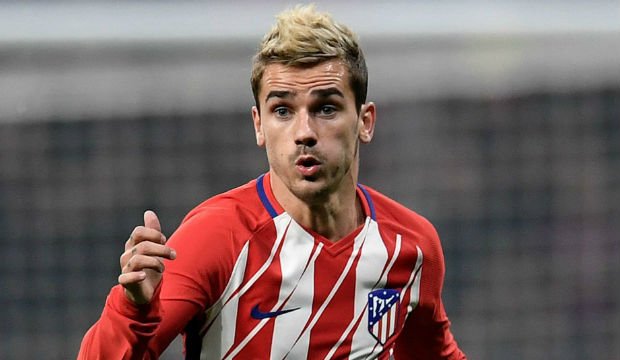 Griezmann started his footballing journey with the Youth academy system of his local club UF Mâcon. He then went for a trial with Montpellier in 2005. During that time, Real Sociedad scots saw him play for Montpellier against the youth academy squad of Paris Saint-Germain. Shortly after, they offered him a one-week trial at Real Sociedad after looking at his brilliant gameplay. Griezmann readily accepted the offer and went to San Sebastián. He then subsequently offered a second-week stay at Real Sociedad. After that, they formally offered him a youth contract to stay at the club.

After four years of rigorous training, Griezmann earned his first call-up by Martín Lasarte. The coach selected him for Real Sociedad’s pre-season campaign in the 2009-2010 season. Shortly after, Griezmann made his competitive debut in the Copa del Rey match against Rayo Vallecano on 2nd September 2009. He then made his Segunda División debut against Real Murcia on 7th September 2009, as a substitute. The same month, he scored his first professional goal against Huesca on 27th September 2009. He helped the side to win the second division in 2009 and earned the promotion to La Liga for the 2010–11 season.

Griezmann signed his first professional five-year contract with Real Sociedad on 8th April 2010. He then made his La Liga debut for the club against Villarreal on 29th August 2010. Shortly after, he scored his first La Liga goal against Deportivo de La Coruña on 25th October 2010. Griezmann again scored against Deportivo in the final decisive game of the 2012–13 campaign. And for that victory, Real Sociedad earned their qualification for the UEFA Champions League. Griezmann then scored against Lyon on 20th August 2013, helping Sociedad to qualify for the UEFA Champions League group stage.

Griezmann signed a six-year contract with one of the richest football clubs, Atlético Madrid, on 29th July 2014. Atlético, on the other hand, paid a then-record transfer fee of €30 million to Real Sociedad for his transfer. He then made his debut for the club in the Supercopa de España match against Real Madrid on 19th August 2014. Shortly after, Griezmann scored his first goal for the club in a UEFA Champions League group stage match against Olympiacos on 17th September 2014. He then scored his first La Liga goal for Atlético against Córdoba on 1st November 2014.

Griezmann scored his first La Liga hat-trick against Athletic Bilbao on 21st December 2014. Two years later, he signed a new five-year contract extension with the club on 23rd June 2016. The following year, he signed another one-year contract extension with the club in June 2017. Atlético Madrid, while confirming the contract signing, also confirmed that they raised his release clause from €30 million to €100 million. Sadly, Griezmann then earned his first red card in his career against Girona on 19th August 2017. Recently on 19th June 2018, he rejected a €100 million move to Barcelona and signed a fresh contract extension with Atlético Madrid. 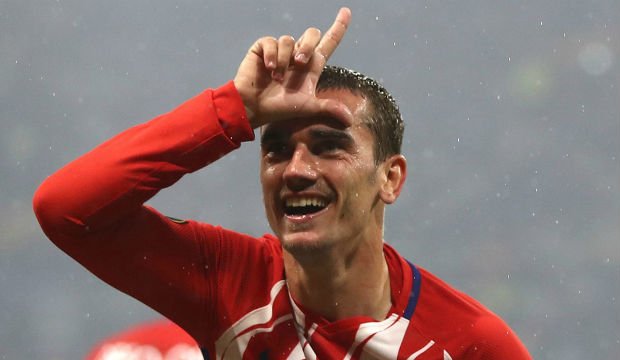 Griezmann earned his first call-up for the French under-19 team on 23rd February 2010, for two friendly matches. He then made his debut for the U-19 side against Ukraine on 2nd March 2010. The same year, he earned his call-up for the UEFA European Under-19 Championship squad on 7th June 2010, under the guidance of Francis Smerecki. Surprisingly, he helped his nation to lift the trophy and also achieved his place in the Team of the Tournament that year.

France’s then U-21 coach Erick Mombaerts called him as a replacement for Gabriel Obertan shortly after his success at the 2010 UEFA European Under-19 Championship. Griezmann then made his debut as a substitute against the Russian U-21 side on 16th November 2010. The next year, he earned his call-up for the 21-man squad on 10th June 2011, to participate in the FIFA U-20 World Cup. He played his first match on the competition against Colombia on 30th July 2011.

One of the best football managers, Didier Deschamps, called Griezmann for the French senior side on 27th February 2014. He then made his senior international debut against the Netherlands at the Stade de France on 5th March 2014. Shortly after, Deschamps again inducted him in the 2014 FIFA World Cup squad of France. He then scored his first international goal for France against Paraguay on 13th May 2014. Griezmann made his FIFA World Cup debut few days after, on 15th June 2014 against Honduras.

He earned his call-up for the French squad to participate in the UEFA Euro 2016. Griezmann then made his Euro debut against Romania on 10th June 2016. Recently on 17th May 2018, he earned his call-up for the French squad for the 2018 FIFA World Cup in Russia. He scored his first goal of the tournament from a penalty against Australia on 16th June 2018. He then won the ‘Man of the match’ title at the 2018 FIFA World Cup Final due to his brilliant display of gameplay. Besides, he also received the Bronze Ball for being the third best player of the tournament. 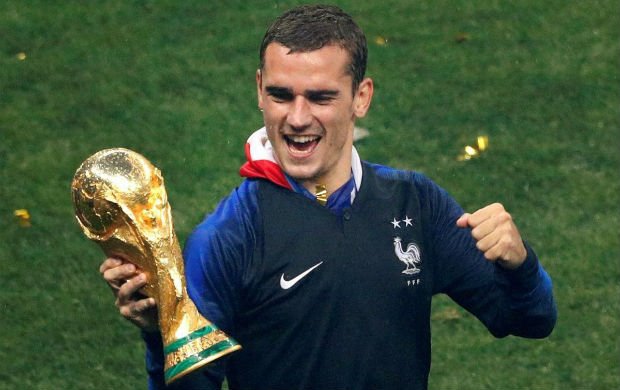 Born in the commune of Mâcon in the département of Saône-et-Loire, Griezmann is of German descent through his father’s side. Alain Griezmann, his father, was a town councilor and was originally from Münster, Germany. Isabelle, his mother, is a former hospital cleaner and is of Portuguese descent. Interestingly, Isabelle’s father Amaro Lopes was a professional footballer and played for F.C. Paços de Ferreira. Griezmann married his long-time girlfriend Erika Choperena in July 2017.

The current net worth of Antoine Griezmann is estimated to be around €17 million as of the ongoing football season of 2018-19. His current market value now stands at €120 million as of 2018. He receives around €382,000 weekly salary from his current La Liga side Atlético Madrid. Besides his footballing income, he also made his huge wealth through several endorsement deals.

With Atlético Madrid, Griezmann won the Supercopa de España title in 2014 and became the UEFA Champions League runner-up in 2016. He then won both the UEFA Europa League and UEFA Super Cup in 2018. With the French national team, he recently lifted the prestigious FIFA World Cup trophy in 2018. Besides his team’s success, he has several accolades under his name. Some of the most notable individual awards that Griezmann received till now are as follows: