It took the whole US by storm as Colin Kaepernick bags new Nike campaign. And he did it even without having his place in the National Football League. Mark Geragos, the attorney of the former San Francisco 49ers quarterback, made the new signing announcement on Twitter. Moreover, he also called Kaepernick an “All American Icon”. Besides, Geragos also thanked attorney Ben Meiselas for his involvement in this successful deal.

Kaepernick, on the other hand, also confirmed the news by posting a Nike ad with his closeup on Twitter. He wrote ‘‘Believe in something, even if it means sacrificing everything. # JustDoIt’’. Although, he already had a sponsorship deal with Nike. But, the expiry of the contract is pretty close. But now, he bagged a multi-year deal after a brief negotiation with the American sports giant. Kaepernick will now be featured as one of the flagship faces of Nike’s “Just Do It” campaign for their 30th anniversary.

Believe in something, even if it means sacrificing everything. #JustDoIt pic.twitter.com/SRWkMIDdaO

An insider of Nike already confirmed that the company will feature Kaepernick on various platforms. The company will feature him on television commercials, billboards, and online ads for the upcoming anniversary campaign. Nike also has a plan to launch an apparel line for the quarterback. They will also help his ‘Know Your Rights’ charity according to the recent rumors.

Kaepernick created a solid spark by kneeling during the national anthem at the 2016 NFL season as a protest for the racial discriminations and Police brutality. He opted out of the league after that controversy. While talking about his impact on the American youth, Nike’s vice president for North America Gino Fisanotti stated: “We believe Colin is one of the most inspirational athletes of this generation, who has leveraged the power of sport to help move the world forward.”

Recently the NFL Commissioner Roger Goodell made statements while talking about the Kaepernick’s incident. He said “This season, all league and team personnel shall stand and show respect for the flag and the anthem,” and added, “Personnel who choose not to stand for the anthem may stay in the locker room until after the anthem has been performed.” 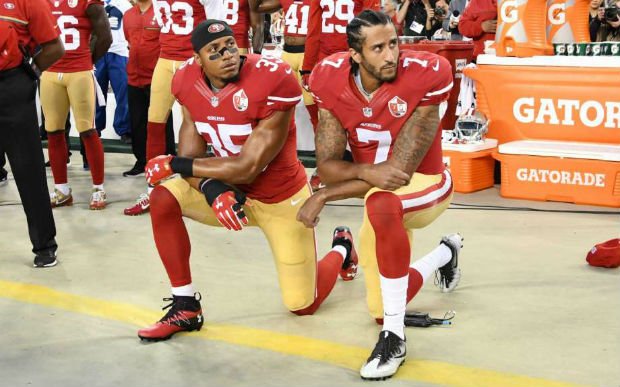 Sandra Carreon-John, the spokesperson, stated clear statements while talking about Nike’s association with the NFL and the upcoming ad campaign with Kaepernick. She said “Nike has a longstanding relationship with the N.F.L. and works extensively with the league on all campaigns that use current N.F.L. players and its marks. Colin is not currently employed by an N.F.L. team and has no contractual obligation to the N.F.L.”