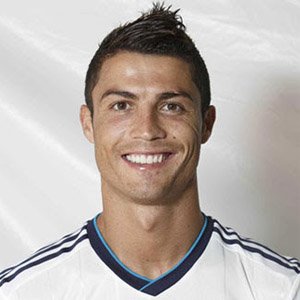 Read the latest in our Cristiano Ronaldo blog »

Cristiano Ronaldo is, without a doubt, one of the most celebrated footballers in the history of the sport. It’s no exaggeration if he is called a living legend. An extremely talented player, CR7’s trophies, awards and titles stand as testimony to that. However, Cristiano is not just a skilful footballer, but is also a superstar who received the love and adulation of millions of people across the globe. Some want to be him, and others, to be with him.

He might have haters or critics too, but that only proves that he is doing something right. The negativity has failed to stop Cristiano Ronaldo. He has succeeded in striking the perfect balance as a football player, an influencer, brand ambassador, a businessman, and a true family-man. 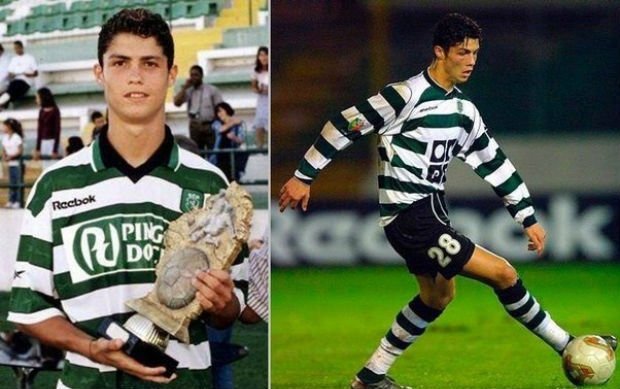 In a matter of just a single season in 2001, Cristiano moved across U-16, U-17, U-18, B, and first teams. In 2002, he debuted in a Primeira Liga match in which he faced Moreirense. He netted two goals in the game. In that season, he performed so well that Cristiano managed to draw several clubs’ attention. He came close to switching to Parma, a Serie A side at the time, and was offered €11 million for the deal. But, one single match against EPL giants Manchester United changed the course of his career completely. Sporting beat MUFC with the scoreboard reading 3-1, and Cristiano alone made 2 goals. It was 6 August 2003, and one of the greatest football managers of all-time Sir Alex Fergusion, after watching the match, wanted the boy wonder in England. Even Rio Ferdinand wanted Ronaldo as a teammate.

Cristiano Ronaldo signed a deal worth an enormous £12.24 million to move to MUFC, becoming the most expensive teenager transfer of that time, and he paid back to the team in every possible way. He played well, and began absorbing the training, thus growing every day. In the final of FA Cup 2004, he scored three goals for MUFC, and helped lift the trophy. In 2006, he scored a total of 23 goals. In 2008, there was a renewal of his contract for £31 million, and again played one of the finest seasons, with a record 42 goals! Cristiano Ronaldo helped MUFC earn 3 premier league trophies.

In spite of his personal issues, or his mother’s cancer or his father’s death, 2006-08 was one of the most successful phases in his life. The brand CR7 was first created at MUFC, because Sir Alex wanted Cristiano Ronaldo to play wearing shirt no. 7. Ronaldo was hesitant initially, because only the biggest names in football were associated with this number, but finally, he agreed. His MUFC career earned him great offers from various clubs. He also earned some great friends here, and his mentor, Sir Alex Ferguson. 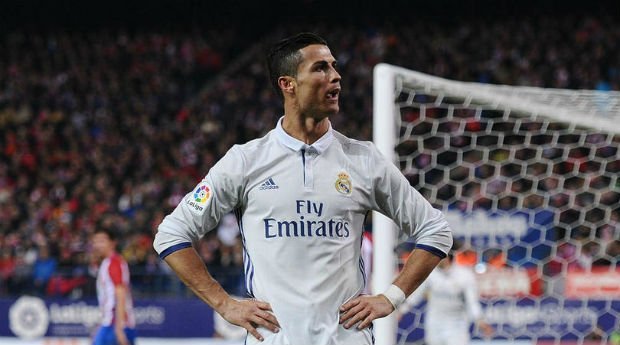 With the focus of media and critics on Cristiano Ronaldo, everyone started questioning his loyalty towards MUFC, after CR7 came back from World Cup 2006, in which a match between England vs Portugal saw Rooney being sent off, and Ronaldo being noted winking at the crowd. He came back a villain. In 2009, Ronaldo moved to Real Madrid, for £84 million. He started with jersey 9, but Raul moved out, leaving shirt no.7 for Cristiano in 2010, and CR7 stepped into a new chapter of history – at Real Madrid. He has stayed with the Spanish club, and has made unbeatable contributions, besides winning personal accolades. The most recent of these achievements include Real’s successive Champions League titles till 2016-17, as well as the La Liga win in the same season, his fifth Ballon d’Or, and so on!

Cristiano Ronaldo has also done enormously well for Portugal. He became part of the U-15 team in 2001, at the age of 15. He then joined the teams of U-17, U-20 and finally U-23, till he finally joined the senior team in 2003. He played his first game against Kazakhstan. He represented the team in World Cup 2006, and scored the second highest goals in qualifying round. The team had a huge overhaul in 2008, and Cristiano Ronaldo became the captain. CR7 led the team in World Cup 2010. They played well till the 16th round. In 2014, Cristiano Ronaldo turned out to be the single reliable member of Portugal, and he played amazingly. 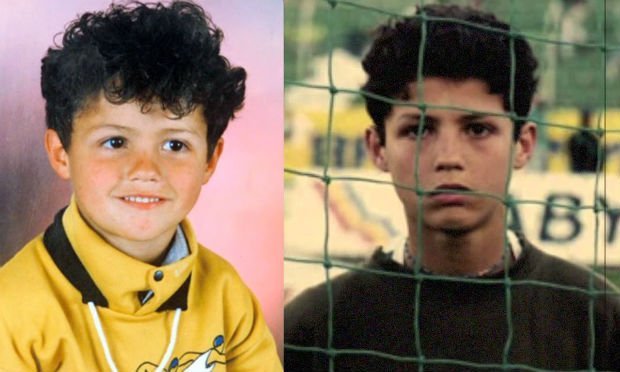 CR7 was born on 5th February 1985 as Cristiano Ronaldo dos Santos Aveiro in São Pedro in Funchal, on Madeira, a Portuguese island. He is named after Ronald Reagan, the favourite actor of his father. He was middle-class boy, living in a tin-roofed house by the sea. His father was a gardener and his mother a cook and cleaning lady. Even amid all the hardship, she encouraged young Cristiano to play soccer. His father’s job as an equipment manager introduced Cristiano to soccer first, and he became amazing, even at 10 years. Fernao Sousa, his godfather, remembers how he skipped meals, missed sleep, and ditched homeworks, for football. His friends reminisce how Cristiano raced with plying cars at traffic signals.

He used to play for Andorinha , an amateur team, from 1992 to 1995. The other kids loved him at school, but the teachers didn’t feel the same. He was expelled from school after he threw a chair at one of his teachers for seemingly disrespecting him. He and his mother soon decided that he would stop pursuing formal education, and pay complete attention to soccer. But, his racing heart made him undergo surgery. It could have stopped him from playing, but he soon returned.

Back in 1997, Cristiano Ronaldo, at the age of only 12 years, attended a three-day trial with Sporting CP, and signed with them for £1,500. Later, he joined the club’s football academy by switching to Alcochete near Lisbon. At the end of a short stint with Nacional da liha da Madeira, CR7, in 2001, joined Sporting Portugal, at the tender age of 16 then. He succeeded in displaying some impressive dribbling. László Bölöni, the first-team manager of Sporting, moved him up from the youth team. 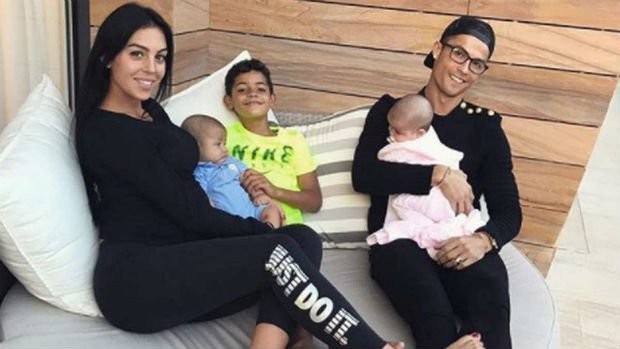 Cristiano Ronaldo is the smallest among the four children of late Jose Dinis Aveiro and Maria Dolores dos Santos. Jose, a gardener as well as equipment manager, struggled with alcoholism, which hurt his kidney. Cristiano Ronaldo tried to make him lose the habit by sending him to a rehab, but Aveiro refused. After kidney problems, he finally died in 2005. Cristiano’s mother worked as a cook and cleaner when Cristiano was still young. Around 2007, she was diagnosed with breast cancer, and this affected Cristiano, as well. However, things changed for Dolores, soon, after thorough treatment. Dolores is an important part of Cristiano’s life, with her constant support, from helping him begin his career, to taking care of his children. Ronaldo’s elder sister, Liliana Cátia is a celebrity of her kind. She is a musician, and a fitness blogger who promotes body positivity. Cristiano also has a brother, Hugo, and another sister, Elma, but both Hugo and Elma prefer to stay away from public eyes.

Ronaldo is known as a Casanova. He has had quite a few romantic relationships. Some lasted for just a few weeks, while others have continued for several months. The ladies in CR7’s life are actresses, models, socialites – all beauties matching his level of good looks. Some of the ladies in his life who created a stir are Niki Ghazian, Nuria Bermudez, Mercge Romero, Irina Shayk, etc. Rumours say he was involved with the Kardashians sisters, as well as Paris Hilton. But his most serious girlfriend, after Irina Shayk, is his current romantic interest, Georgina Rodriguez, who recently gave birth to his child, baby Alana Martina. They have been publicly dating since November 2016.

CR7 is the father of four beautiful children. The eldest is 10 years old Cristiano Ronaldo jr. whom everyone calls Cristiainho. The identity of his biological mother is not revealed. While some think she was one of Cristiano’s former girlfriends, others believe she was a surrogate, like in case of his twins born in June to an anonymous surrogate in 2017. The twins, a boy and a girl, are named Mateo and Eva. In November, 2017, Cristiano Ronaldo had his fourth child. His girlfriend Georgina Rodriguez gave birth to Alana Martina. 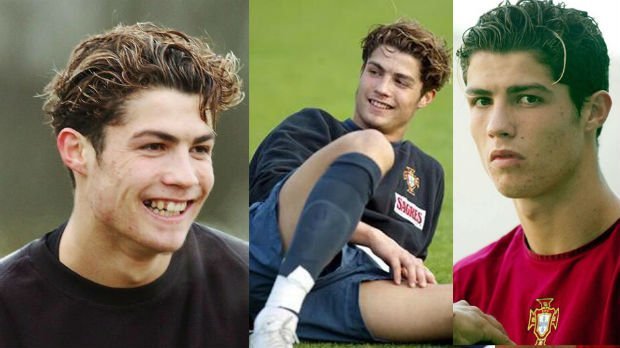 In 2017, Forbes declared Cristiano Ronaldo as the highest paid athlete, based on his net worth, $93 million. The amount includes $35 million from sponsors as well as licensing deals. A big part of it comes from sponsorships. It was found that his Instagram posts are worth £310,000 each! After a year-long demand by the player, CR& and Real Madrid have seemingly agreed on new terms of his contract with the club, which will ensure a salary of £26.5 million a year from the Spanish club, which is about £8 million more than his current salary from the team.

Cristiano Ronaldo’s biggest rival is Lionel Messi, the Barcelona representative. The Real Madrid vs Barcelona rivalry is now synonymous with Ronaldo vs. Messi competition, because the two players are now the biggest representatives of the two teams, and boasts the biggest rivalries of football. They are pitted against one another, and not only in matches where they face each other. Their overall numbers are compared at all times.

The media compares their personal and professional lives. These two maintain a healthy competition, and mutual respect. They consider one another as competitors of opposing teams – nothing more or less. As for the stats, they are not too far from each other. Their all-time career records, both, club and country matches, reveals that Messi has played in 705 matches, and scored 568 goals. CR7 has 608 goals in 863 games. Every season brings new comparisons, and after the 2016-17 season, in which Ronaldo has helped his team bag the La Liga and Champions League titles, Ronaldo got his 5th Ballon d’Or, and leveled with Messi.