Success is taken as a product of the long tedious journey or tiresome effort but some stories defy such odds in a manner as they were never there before. Same goes for the Pakistan Cricket team’s speedster Hasan Ali, who took over the cricket world within no time. The phrase which suits Ali’s rapid uprise in the cricket scenarios is ‘he came, he saw, he conquered’,  as within just playing 25 ODI’s he has got himself as the Number 1 ODI Bowler at the ICC ODI Rankings. The right-arm pacer’s aggression on the field keeps Green Shirts morale high and one can’t deny his crucial role in Pakistan’s Champions Trophy triumph.

The best thing about this 23-years old youngster is he knows tricks and trades of the bowling departments and is least affected by the conditions around. Following, the Champions Trophy, he carried on with similar form and shook the cricket-enthusiasts with ending up as the Man of the Series of the Pakistan vs Sri Lanka ODI series. It will be relevant to mention here that Hasan Ali, the leading wicket-taker of Champions Trophy also ended as Man of the Tournament of this mega-event. 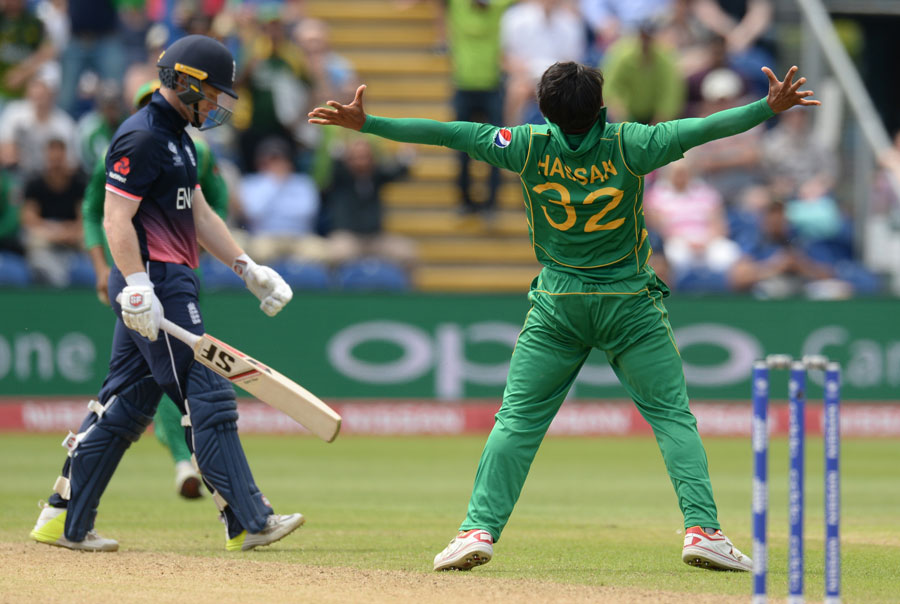 Vs England, 7th September, 2016 at Manchester

Like many of the aspiring cricketers, Hasan’s passion for the game of cricket wasn’t disciplined or dedicated.  At the very beginning, cricket was a sport that he used to play along with his friends on streets just as any other recreational activity. But later with growing up his urge to represent Pakistan Cricket Team and become famous pushed him to do more and more. The cricketer, hailing from Gujranwala, City of Wrestlers (Pehlwans) also tried his hand at Kabbadi but cricket was something Ali would go crazy for.

Things became clear for Hasan Ali at quite young age and that was the point when he put all of his potential and commitment to go on to represent Pakistan Cricket Team one day.  Hasan’s rise to the Pakistan cricket team and all of what he has achieved so far is all because of his elder brother Atta Ur Rehman’s support. Pakistan’s premier fast bowler shared his photo with his brother on social media and captioned it as “The inspiration and motivation behind my dreams!! The person that never let me quit.”

At the age of 10, Hasan Ali was lucky enough to get professionally trained under one of the famous cricket coaches of Gujranwala. Family’s support, especially his brother’s support always kept Hasan Ali going in every thick and thin. 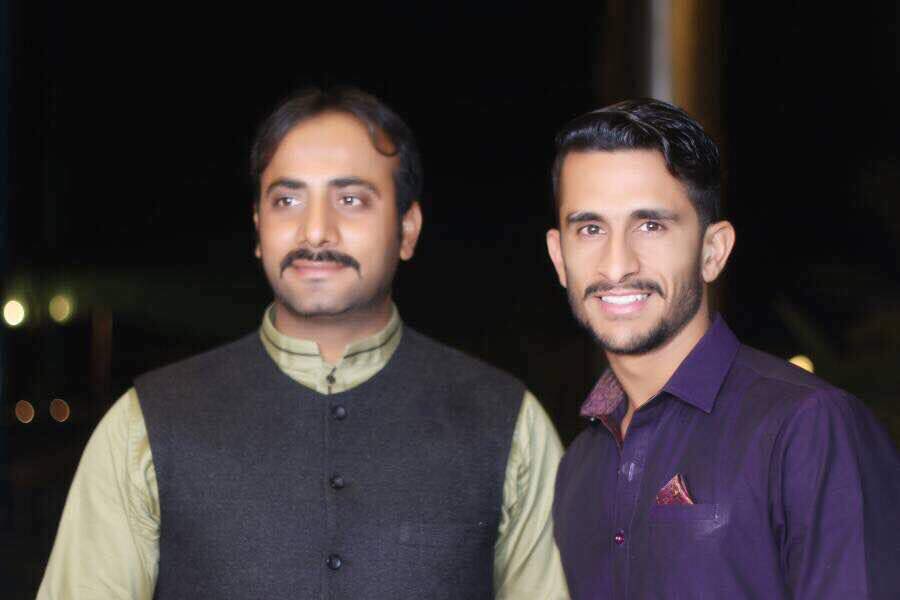 Hasan Ali’s elder brother Atta ur Rehman, a district-level batsman was first to recognize his brother’s commitment and passion towards the game of cricket. Hasan was only 5-years old when Atta used to play the cricket district-level, and this was the time when Pakistani star bowler got inclined towards the gentleman’s game.  Hasan was only 5-years old when he used to accompany his brother to the nearby stadiums for practice.

Rehman took no longer to realize his brother’s passion for the game and went on an extra mile to provide all the required facilities within the premises of the house. The elder brother setup pitch and a gym where Hasan could practice and nurture his game. Not only this, Atta Ur Rehman also stood in front, whenever parents asked Hasan Ali to quit cricket and pay more of his attention towards the studies.

The right arm pace gum was only 10 when his brother was convinced with the way he used to bowl. Following it, Atta took Hasan Ali to Gujranwala’s famous coach Ansar Zafar, who is responsible for bringing talents like Imran Nazir, Bilawal Bhatti and Imran Nazir to the limelight.

It was a clear road for Hasan Ali towards his dream and with his brother patting behind it become way more fluent and easy for the aspiring cricketer, who finally got the chance to represent Green Shirts at the age of 22. 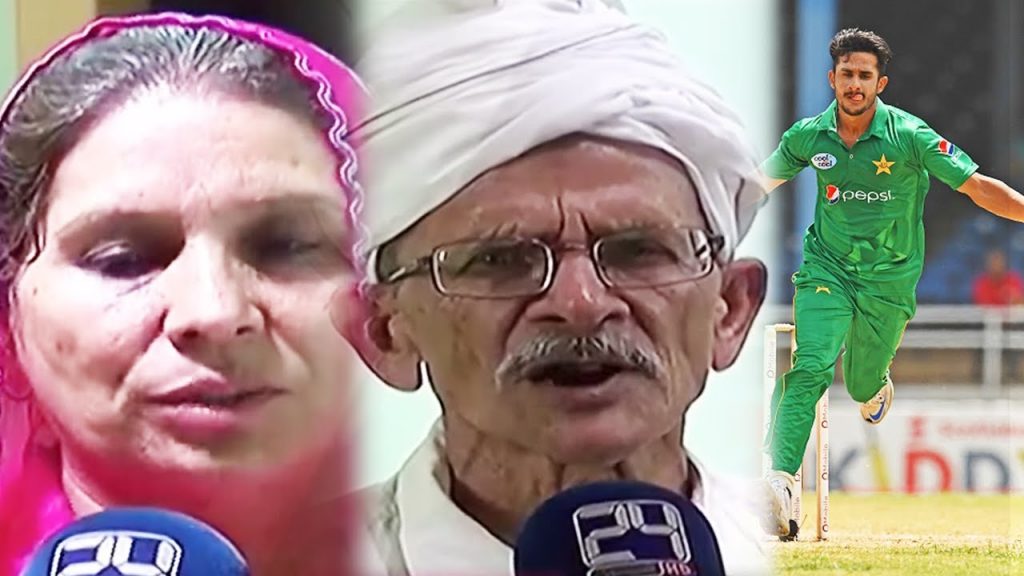 After being taken to the coach-cum-mentor, Ansar Zafar, Hasan Ali had the goal set clear and from right onwards he went on striving to gain more and more.  Ansar Zafar aka Baba Jee took a little bowling trial before the admission of 10-years old Hasan Ali, and with seeing him bowling he agreed upon to take young Ali under his wings.  10-years old Hasan Ali was fortunate enough to become the part of the Young Combine Star Club, from where onwards it was easy for him to get burst into regional or district-level teams.

The right arm quickie grabbed the eyeballs with his performances at the club cricket and Zafar’s mentorship plus coaching worked as icing on the cake for his budding career. After coming at Young Combine Star Club at the age of 10, it took him around 4-years to get the major breakthrough as the learning process continued slow and steady for him. The 14-years old Hasan Ali showcased his skills rightly at the regional under-16 trials at 2009 and got on to represent Gujranwala Under-16.

With aim of representing the national team, Hasan Ali always believed in taking things one extra mile. The thing which worked superbly in his favor was his commitment-level and punctuality towards his training schedules. As per his brother, Hasan Ali used to train for 8 hours daily; which he divided into two sections, one for the physical fitness and the other specifically for the bowling practice. Each of the training section comprised of 4-hours and that made Ali do bit extraordinary on the field.

After playing for Under-16 Gujranwala region, Hasan Ali next came under scanner during his trials for the Sialkot region.  It will be pertinent to mention here that Sialkot region was better structured and had more of the opportunities for the young lads. The same happened for currently ODI number 1 bowler, who burst into the first class and list-A career through his play for Sialkot region.

Hasan Ali was practicing for so long how he could get things done wrong on his first-class debut. Apart from bowling, he also added crucial 27 runs in the team total and made Sialkot Stallions scoring 382 on the board. Hasan Ali dismantled Lahore batsmen’s in the first innings with taking 4 wickets and making them fall on a law score of 110. The right arm speedster ended up his debut first class-match with 5 wickets to his name. It won’t be wrong to say that Hasan got the dream-debut that paved the path for his List-A career.

Hasan Ali’s debut performances were hitting the bulls-eyes as they were good enough to keep things working for them. In his debut List A game, he took 2 wickets from 5-overs with giving away 20 runs. With his initial performances, Hasan Ali made waves in the Sialkot cricket region, especially because of his attitude towards the game of cricket.

Hasan Ali’s economical spells in T20s made him a pure delight to watch, and the sole credit for all this goes to his pace variations while bowling. The Haier T20 Cup 2015-16 worked brilliantly Hasan Ali’s way where his performance with the ball took his team to the semi-finals. While playing under-captaincy of Shoaib Malik at the tournament, Hasan Ali took 8 wickets from 4 matches at the economy rate of 6. This tournament helped the young rising to grow up as a cricketer as it had many national stars showing off their skills. The right arm quickie recalls this T20 cup as one of his eye-catching performances and also feels honored for playing under the captaincy of Pakistani star cricketer Shoaib Malik. 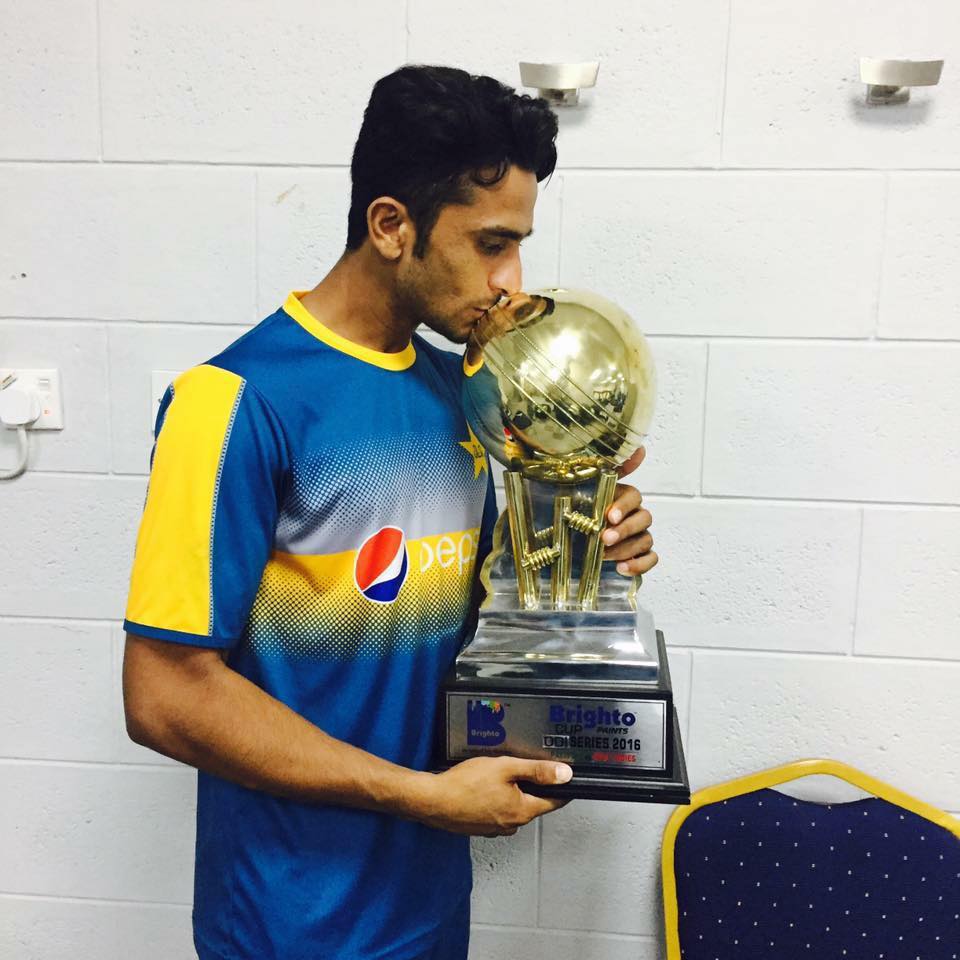 The hunk hailing from Gujranwala seemed unstoppable as his consistent back-to-back performances at different domestic tournaments were making him more prominent on the board. Months after his eye-catching performance at the Haier T20 Cup 2015-16, he replicated the similar form and class in National One Day Cup 2015-16. It should be kept noted here that Hasan Ali was under the selectors’ radar for quite some time, and with his scintillating performances at National One Day Cup, there was nothing that could keep him away from making debut for the Pakistan Cricket Team. Hasan Ali took 17 wickets at an average of 17.05 in this star-studded ODI tournament, and this got him place in PSL and then in the Pakistan Cricket Team.

After his mind-boggling performances at National T20 and ODI tournaments, Hasan Ali became the talk of the town and right then he got picked up by the Peshawar Zalmi from the emerging category at Pakistan Super League 2016. 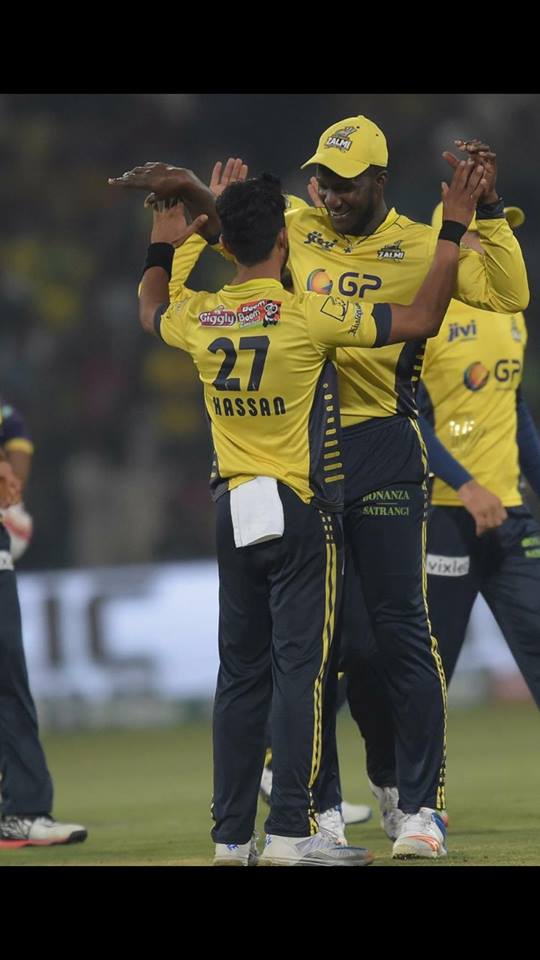 The Head Coach of Peshawar Zalmi, Mohammad Akram was already monitoring Hasan Ali’s dominance in the domestic circles, and with getting an opportunity, he immediately snapped him for Peshawar Zalmi at first edition of PSL. “Rubbing shoulders with the some of the best in the business such as Shahid Afridi, Shaun Tait, and Darren Sammy helped me a lot and provided me with much-needed confidence”, Hasan Ali said after PSL debut season.

At the PSL 1st edition, Hasan Ali could only get 3 games, but they were enough to get him retained in the squads for next edition.  In the PSL 2017, Hasan Ali ended up PZ’s second highest wicket-taker with taking 12 wickets from 11 PSL matches. 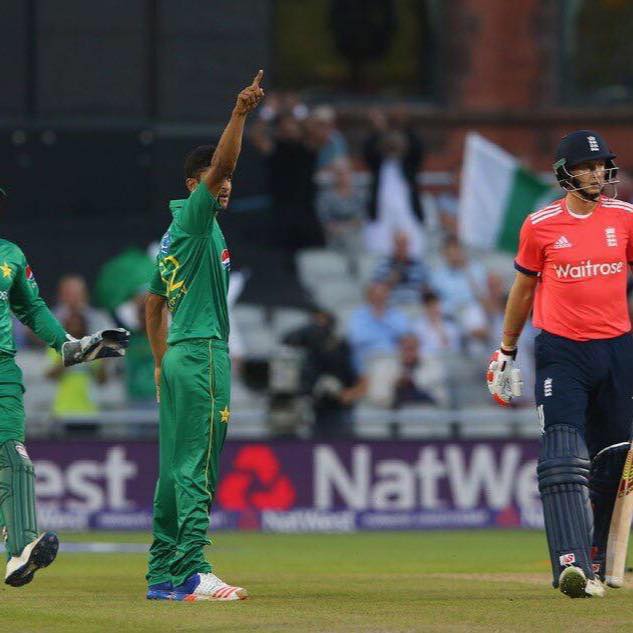 His 17 wickets at 17.05 in the National One Day Cup 2015-16 booked his berth in Pakistan Cricket Team.  The hyped domestic star ended up his debut ODI match wicket-less but remained in the circle with taking five-fors from his first 15 ODI games. 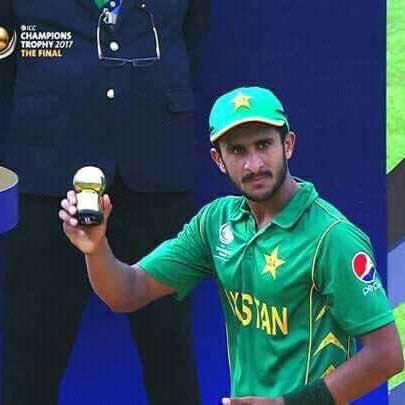 Man of the Tournament

His two five-fors against Australia and West Indies from his first 15 ODI games were keeping him in limelight but Champions Trophy was the event, which transformed him altogether.

Pakistan’s opening game at Champions Trophy 2017 was against the arch-rivals India and it turned out to be a one-sided affair in favor of the Blue Shirts. Hasan Ali was smashed by the Indian batsman as he ended up his 10-over bowling quota for 70 in 10 with just taking one wicket.

Since the defeat at CT opener, not many of the cricket fans were optimistic about Pakistan cricket team performing any good in the next matches of the event. But what came next was something way beyond expectations as Pakistan went on winning next 4 games including the Champions Trophy 2017 final against India. The person who needs to be most credited for Pakistan’s uplift at this mega-event was the rising star Hasan Ali, who recoiled back superbly after being thrashed in the opening game at the event by Indian cricket team. The right arm quickie took three wickets in each of Pakistan’s next four matches at Champions Trophy 2017 and ended up his campaign as the highest wicket-taker of this tournament.  Hasan Ali took 13 wickets at an average of 14.69 with an economy of just 4.29; for all his brilliance, he was announced the Man of the Tournament of Champions Trophy 2017.

Man of the Series

Hasan Ali continued with his Champions Trophy 2017 form and troubled the Sri Lankan during ODI and T20 series held in UAE in November 2017. His wicket-taking habit in middle-overs regularly made him the pivotal bowler for Pakistan Cricket Team.  The next thing which worked in Ali’s favor is his consistency with the ball, which has also made him stand tall as the Man of the Series of the Pakistan vs Sri Lanka ODI series. 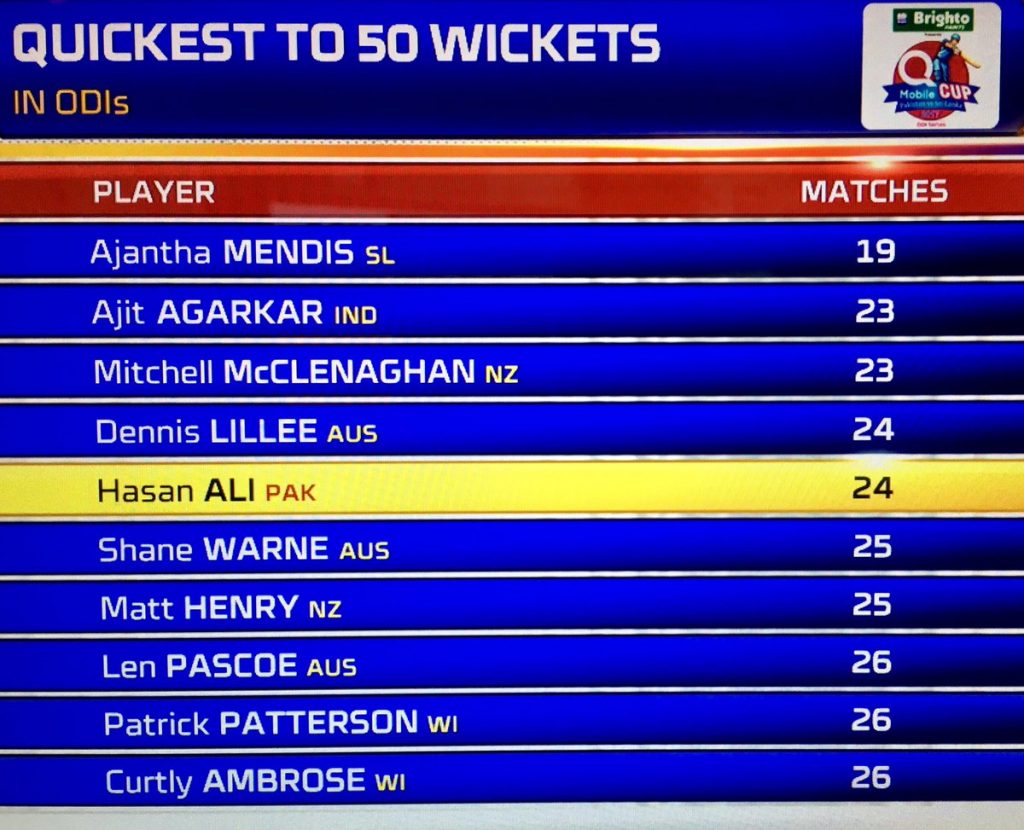 Hasan Ali Most Wickets in ODIs in 2017 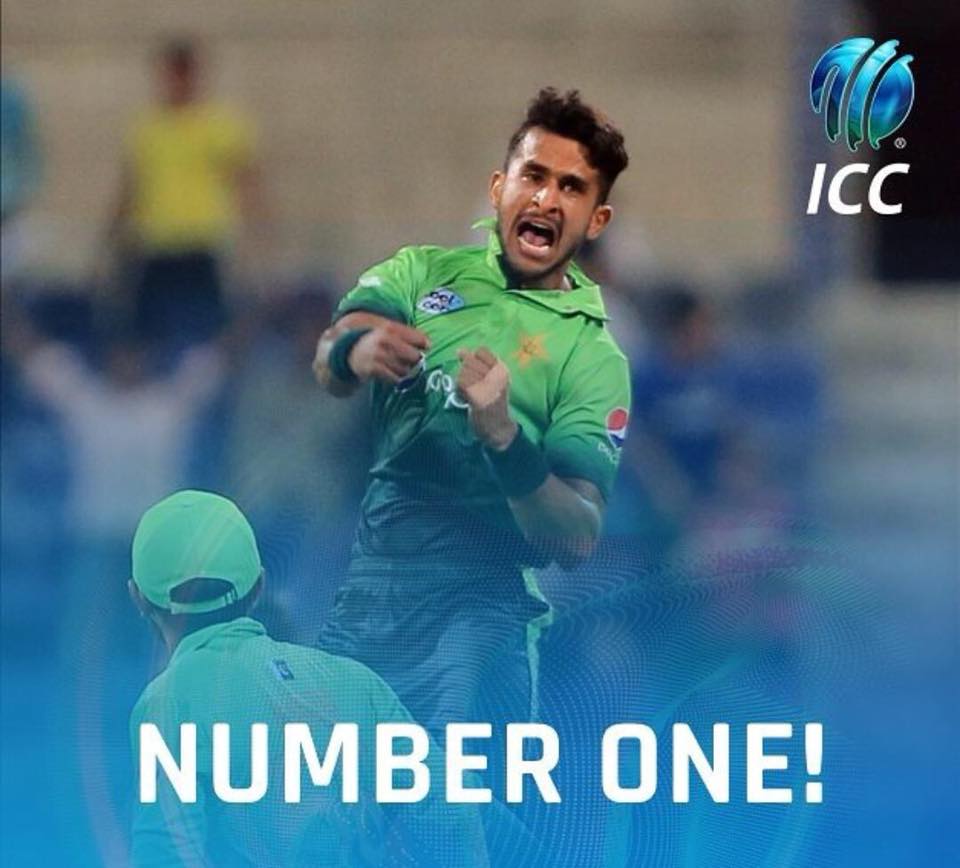