Nelson- A Legendary Myth of Cricket

Myths and superstitions are everywhere in Cricket. For instance, an amazing fact is that Sachin Tendulkar always wore his left pad first, and still uses the old buckle type pads while Steve Waugh always carried a handkerchief given to him by his late grandfather. Moreover, there are some amazing in-game superstitions also related to Cricket. It’s always a rush in our veins while watching anyone who is close to his century. The whole world gets nervous whenever they are in “Nervous Ninety” with the batsman. The equivalent superstitious number is 87, or the “Devil’s Number”, and also it’s the “thirteen shy” of 100. Devil’s Number is still very widely known in Australian Cricket. Statistics have shown that more Australian batsmen are, in fact, dismissed on the numbers surrounding 87.

You May Also Like: 286 Runs In A Ball- The Funniest Part In Cricket History 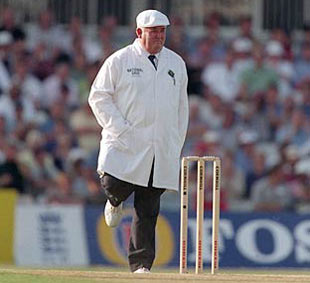 Did you ever wonder why David Shepherd and many other umpires raise their legs or lift their heels from the ground every time a team or individual scores 111 or its multiples, while crowds notice that and cheers this leg-raising? It is called “Nelson”, “Double Nelson”, “Triple Nelson” and so on. Nelson is a piece of cricket slang terminology and superstition which is believed to be named after Lord Nelson. Lord Nelson or Horatio Nelson was born in 1758 and was a British flag officer, famous for his service in the Royal Navy, particularly during the Napoleonic Wars. He was noted for his leadership, and superior grip of strategy and unconventional tactics, which gave him a number of decisive naval victories.

A mishap with Nelson in Napoleonic War:

It is widely believed that the Nelson Number actually comes in accordance with Lord Nelson’s lost eye, and also an arm and a leg during battles. Where the historical fact is that Lord Nelson died with his full set of lower limbs and an intact left eye during The Battle of Trafalgar in 1805. He had lost the power of sight in his right eye during the siege of Calvi, Corsica, in 1793 and had his right arm amputated during an expedition to Santa Cruz, Spain, in 1797. Another suggestion is that the number is derived from his three great victories, namely, Copenhagen, Nile & Trafalgar, which gave the sequence, “Won – Won – Won”. It is sometimes also said that he lost “One Eye, One Arm, One Life” during his naval career.

David Shepherd made the popular longstanding practice of raising heels from the ground on Nelson as an effort to avoid ill fate. While talking on Nelson, Bill Frindall, a longtime cricket historian and scorer once referred to it online as “one eye, one arm, and one etcetera”, implying that Nelson’s alleged third lost body part was his private part. And Umpire David Shepherd replied during a radio interview “One arm, one eye and one lump of sugar in his tea”.

You May Also Like:  Some of Most Interesting Stats in Cricket history

As far as the reason of spreading of origination is concerned, there is an old Gloucestershire superstition that to avoid dismissal on the next ball, the entire team, except the batsman, must have their feet off the ground. Some believe that having no part of your body touching the field brought better luck. Many people also say batsmen are allergic to 111 because it resembles a set of stumps without the bails.

In accordance, David Shepherd says: “Nelson’s always been an unlucky number. Whether it’s 111 because of the three stumps, I don’t know. It’s just a tradition in English cricket.” The superstitious behavior of Shepherd started in the Gloucestershire dressing room when he was a player. Shepherd once said “Whenever I was in the field as a player and the score was 111, I would do a little jump, but, no one really knew I was doing it except one or two friends.

When I did my second Test as an umpire at Edgbaston, in 1985, someone had written into dear old Brian Johnston and said `Watch this idiot when the score gets on 111.’ It did, I did my little jump and there was a titter in the crowd. I thought there must be a streaker on the field but it was Brian telling the world – and the spectators were listening on their radios. I’ve been lumbered with it ever since.”

This belief is held most strongly in Australian Cricket for losing the 1954-55 Ashes series by 1-3 against England. These were twice dismissed for 111, as they were in the famous Headingley Test of 1981 when Botham made his 149 and Bob Willis then took 8/34. It is also rumored ill-fated for Australia because of the 1994 Sydney test defeat against South Africa. Trying to get a grip over the dominant Aussies back then, and with skipper, Kepler Wessels injured and off the field, Hansie Cronje led his team to an unlikely victory.

Only by defending, FanieDeVilliers destructed the Australian team with 10 wickets in that match. The Australians scored 111 while defending 117 on the final day. Alan Donald said it the best test match he had ever played. On 11 November 2011, in a match between South Africa and Australia, when the time was 11:11 and South Africa required 111 runs to win, the majority of the crowd, and umpire, Ian Gould, did Shepherd’s leg raise Nelson for that minute with the scoreboard reading 11:11 11/11/11.

There are other stories also available surrounding Nelson. In late 1900, bankers seemed to have called a sum of one pound, one shilling and one penny `Nelson’. It is also listed as a slang for 111 in a darts book of 1938.