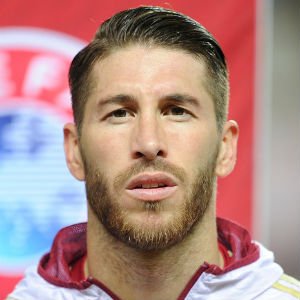 Read the latest in our Sergio Ramos blog »

Sergio Ramos García currently plays as a central defender for the La Liga club Real Madrid besides making regular participation for the Spanish national football team. He currently captains both the Real Madrid and Spain squad. Besides being used in the central position, he can also operate as a right back. A product of the youth academy system of Sevilla, Ramos joined Real Madrid in 2005 and eventually won 18 major titles with the side till now. He helped the club to secure 4 La Liga titles and 3 UEFA Champions League title as of 2018.

Besides having a great club career, Ramos also made his name in the international circuit. He represented the Spanish side in three FIFA World Cups while winning the 2010 edition of the tournament. He also helped his nation to lift the UEFA Euro trophy twice till now. Regarded as one of the greatest defenders of all time, Ramos earned his position in the FIFA World Cup Dream Team in 2010, and in the UEFA Euro Team of the Tournament in 2012. He also became the youngest Spanish player to make 100 appearances for his nation in 2013. Besides, he was named as the La Liga’s best defender a record four times. 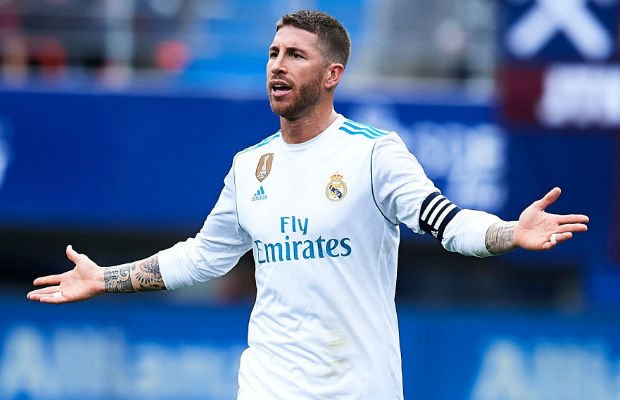 Ramos joined his native club FC Camas during his early childhood. He then joined the youth academy system of Sevilla in 1996, at the age of just 10. He made a steady progression at the academy and promoted through several age-levels alongside fellow graduates, Antonio Puerta and Jesús Navas. His phenomenal display for the juvenile squads attracted the attention of the reserve team officials of Sevilla. He then earned his place in the Sevilla B squad in 2003, at the age of just 17. Since his debut, he displayed some great performances for the reserve side. He played 26 matches for the B team in Segunda División B in the 2003-04 season while scoring twice.

Ramos made his La Liga debut for the Sevilla first-team against Deportivo de La Coruña on 1st February 2004, as a substitute for Francisco Gallardo. He played 41 matches for the club in the 2004–05 season and helped them to achieve the sixth place in the La Liga table along with the qualification of the UEFA Cup. The same season he scored two brilliant goals against Real Madrid and Real Sociedad. Ramos then scored his first continental goal in the UEFA Cup first-round match against CD Nacional at the Estadio Ramon Sánchez Pizjuán on 16th September 2004.

Ramos joined Real Madrid for a Spanish record of €27 million on 1st September 2005. Upon arrival, he received the No.4 jersey previously worn by Fernando Hierro. Shortly after, he scored his first goal for Real Madrid in a UEFA Champions League group-stage match against Olympiacos on 6th December 2005. He then received his first red card in a La Liga match against RCD Espanyol on 18th September 2005. As an interesting fact, Ramos received 4 red cards in his debut season for Real Madrid. He scored his first El Clasico goal against their archrival Barcelona, and also helped his side to win their 30th overall La Liga title in the 2006-07 season.

Ramos scored more than twenty times in his first four seasons with Real Madrid, an unusual record for a defender. He earned his place in the FIFPro Team of the Year in the 2007-08 season, and in both the FIFA and UEFA Team of the Year in 2008. Ramos started playing as the central defender after a horrific injury of Pepe at the beginning of the 2009-10 season. He played 33 La Liga matches that season while scoring four times. He then played his 200th official match for Real Madrid against Villarreal CF on 21st February 2010. Ramos received his 10th red card in an El Clasico game on 29th November 2010, for kicking Lionel Messi from behind. 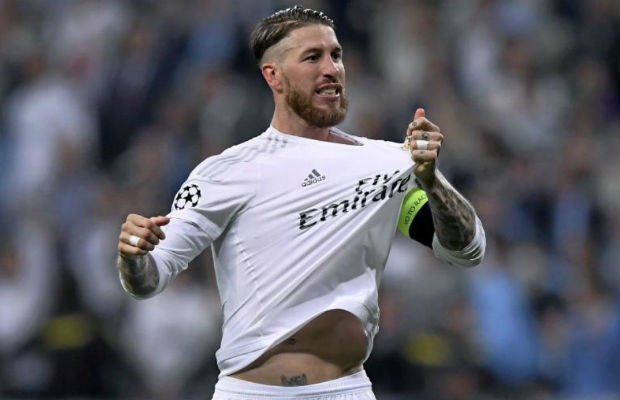 Ramos signed a contract extension with Real Madrid on 12th July 2011, thus securing his stay at the Bernabeu till 2017. He, as the captain, then helped Real Madrid to defeat their archrival Barcelona twice consecutively in just four days in early March 2013. He received his 18th red card, a club record, in a match against Osasuna on 14th December 2013. Ramos then scored the crucial equalizer in the UEFA Champions League final against Atlético Madrid on 24th May 2014, thus winning the trophy and securing the Man of the match award. He helped Los Blancos to secure the 2014 FIFA Club World Cup in Morocco while scoring in both the semi-final and the final.

Ramos signed a new five-year contract extension with Real Madrid on 17th August 2015. Shortly after, he became the permanent captain of the squad, following the departure of one of the greatest goalkeepers, Casillas, to FC Porto. He then helped the side to achieve the highest scoring La Liga victory of 10-2 against Rayo Vallecano on 20th December 2015. Ramos again scored in the UEFA Champions League final against Atlético Madrid on 28th May 2016, thus winning the man of the final title for the second time. He then helped the club to secure the 2016 UEFA Super Cup while scoring in the final against his former team Sevilla.

He scored his 50th La Liga goal against Málaga on 21st January 2017. Shortly after, he played his 500th match for Real Madrid against Osasuna on 11th February 2017. He then achieved his first La Liga title as the captain of Real Madrid through a marvellous win against Málaga on 22nd May 2017. The following month, he helped the side to defeat Juventus in the 2017 UEFA Champions League Final on 3rd June 2017, thus becoming the first captain to secure both the league and European Cup double since 1958. He received his 23rd career red card on 20th August 2017, followed by his 24th red card (a record of 19th La Liga red card) on 3rd December 2017. 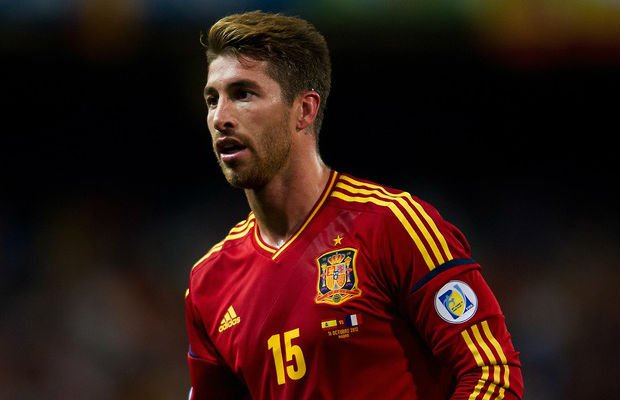 He played his first match for the Spanish senior squad against China in Salamanca on 26th March 2005. He made his debut that day at the age of just 18 years and 361 days, thus becoming the youngest Spanish player to play for the national side. Ramos then scored his first goal for Spain in a 2006 FIFA World Cup qualifying match against San Marino on 12th October 2005. He helped his nation to secure the third place at the 2009 FIFA Confederations Cup in South Africa. Shortly after, he captained the national side for the first time in a friendly match against South Korea in Innsbruck on 3rd June 2010.

Ramos then played every match of the 2010 FIFA World Cup and helped the side to maintain five clean sheets en route to the final. Spain defeated Netherland in the final while Ramos lifting the cup and securing the best Castrol Performance Index score of 9.79. He played his 100th match for Spain in a 2014 FIFA World Cup qualifying match against Finland in Gijón on 22nd March 2013. He became the youngest European player ever to achieve that feat. Ramos then helped his nation to reach the final of the 2013 FIFA Confederations Cup in Brazil. He appeared in his third FIFA World Cup for Spain in 2014, playing alongside another great defender Gerard Piqué. He then captained his nation in the UEFA Euro 2016.

Born in Seville, Andalusia, to his parents Jose María Ramos and Paqui Ramos, Sergio is of pure Spanish descent. He grew up in the Camas municipality of Sevilla with his elder brother Rene Ramos and younger sister Miriam Ramos. Sergio is a Catholic, and has a tattoo of Mary in his left arm. Besides, he also has several tattoos on his body and is known as an ink fanatic. Besides, he is also a big fan of bullfighting, and a personal ally of legendary matador Alejandro Talavante. Ramos is also a fan of horse aficionado. He currently owns a stud farm in his native place which specifically breeds the Andalusian horse.

Sergio Ramos had romantic relationships with several celebrities from 2006 to 2012. He dated Spanish model Carolina Martinez in 2006, Miss Spain 2006 Elisabeth Reyes in 2007, Spanish model Nereida Gallardo in 2007, Spanish soap opera star Amaia Salamanca in 2009, and Sports reporter Lara Alvarez from 2010 to 2012. He then started dating journalist and television presenter, Pilar Rubio, in September 2012. The couple officially confirmed their relationship at the FIFA Ballon d’Or Gala on 9th January 2013. As an interesting fact, the Spanish edition of the FHM magazine named Rubio as the sexiest woman in the world twice consecutively in 2008 and 2009.

The couple now has three sons together. Their oldest son Sergio Ramos Rubio was born on 6th May 2014. Shortly after, they had their second son, Marco Ramos Rubio, on 14th November 2015. Recently on 25th March 2018, the couple had their third son, Alejandro Ramos Rubio. 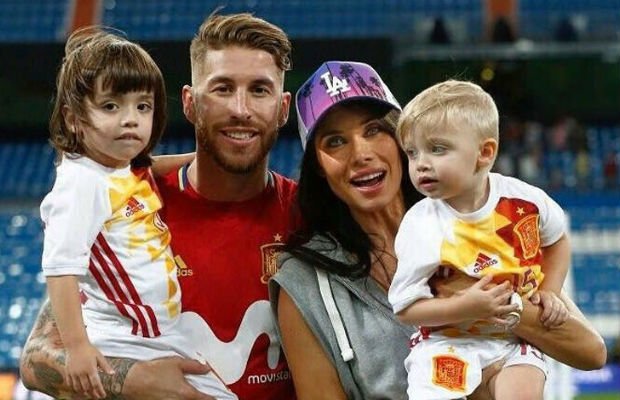 The current net worth of Sergio Ramos is estimated to be around €52 Million according to the recent reports. His market value now stands at €50 Million as of the ongoing football season. He earns around €10 Million yearly from his footballing profession through his participation for Real Madrid and Spain. Ramos now gets €226,500 weekly wage from his current La Liga side Real Madrid. Besides his professional income, he also made his wealth through several endorsement deals. Most notably, he now has a sponsorship deal with Nike and wears their Tiempo Legend VII FG boot since March 2018.